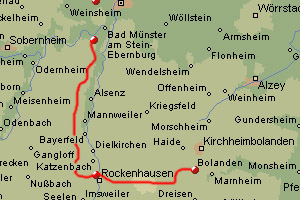 Early in the morning I drive from Bingen to the village of  Alzens, for my second hiking day during this trip. In Alzens I take the bus (full with schoolkids) to Obermoschel.

The trail will lead me today over the hills of the Pfalz and crossing some tiny little villages. The weather is better than yesterday; it is still chilly, which is no surprise end of January, but the sky is clearer. The views that I from the top of the hills are very nice, which I did not expect beforehand. As Trego has described it for some stages now, today I will also be climbing the Donnersberg hill (687 m). This hill can be spotted during some stages already (with clear view, of course!) The Donnersberg is climbed on its “easy” side and descended on its steep side. I had not been looking forward to this hill, partly because of its hostile name (Thunder mountain) and partly because it is the first real stand alone hill that I will be climbing on this Trail. It turns out to be no alpine giant. The descent is more inconvenient due to the blisters that I have at the end of my second hiking day. Finally, the last part of this stage leads through the plain fields to the village of Bolanden.

Here I take the bus back to Alzens, and I drive back home again.