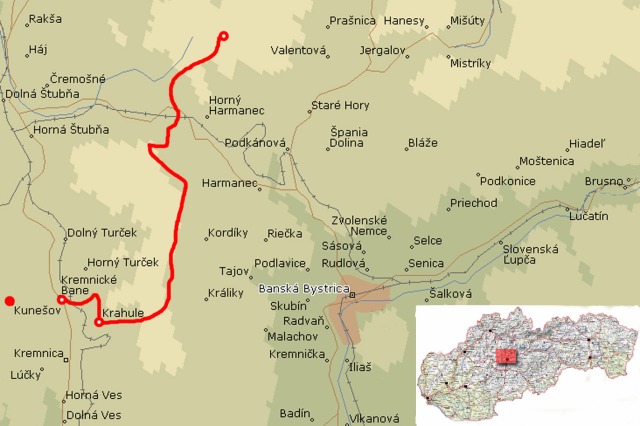 I travel to Slovakia for a two-day hiking trip. Yesterday I came to Kremnica, where I had a reservation in a local hotel. There was nobody around when I called at the front door, so I decided to go to one of the B&B addresses that I had with me. The owner was friendly and we had a chat about being outdoors. He showed me his wounds and bruses that he got last week when he crashed with his ATB in the hills. He was riding straight down the hill without braking, after drinking half a bottle of vodka . . . .  He was kindly enough warning me for bears that live out here in the woods, and what I should be doing if I have the bad luck to meet one. As I am planning a big day for today I take the first bus that drives from Kremnica to Kremnicke bane. When I leave the B&B at 5.45am (on a Sunday morning) I find that there are already many people out. Many cars are driving, pedestrians are everywhere, it looks like life has already begun a few hours ago! The bus takes about 10 minutes to drive to Kremnicke Bane. The road is full of curves and unexpected steep sections.

A few minutes after the start I pass already the first highlight of today. The chapel and memorial rock that indicate the Centre of the World. In the late Middle Ages the centre of the maps of the world, as it was known at that time, was this location. 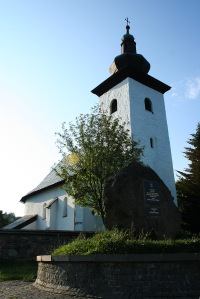 centre of the world

The weather is great, clear blue sky, early morning sun shining bright and a slight gentle breeze. I pass the village of Krahule. The focus of the attention of this village is the winter season; there are some ski facilities, like in many other villages in the hills in Slovakia. I continue my way up the hill, towards the top of the Skalka.

The climb coveres some 400 meters, and it goes straight up the hill. On the upper part of the hill there are, again, ski facilities that should comfort winter tourists. A huge hotel is being constructed when I pass along. There are a few other tourists up here, but no others hikers. Large sections of the north and east side of the Skalka are cleaned from trees in order to create skislopes. Further along the Trail the path is crossing dense forrests that block any potential view in all directions. Too bad, in the east the city of Banska Bystrica is situated, one of the biggest cities in the country. The Trail continuous its way northbound. After the hill Svrcinnik the map indicates that the path goes down to the pass Sedlo Maly Sturec, where the main road is crossed. Unfortunately the path has many short climbs and desecents that are too little to be identified on the map, but they are big enough to break my pace and energy. Long before arriving on the Sedlo Maly Sturec I hear noises of motorcycles pulling up and slowing down. By the time I reach the Sedlo I find out that these are guys that come racing from down the valley up to the pass, turn around and race down again. There are many of them, racing for several hours. I continue my way up the hill, northbound. I take a short lunchbreak when I arrive in the shade again. The temperature is getting hot, and I do not have much drinking water with me today. The half a liter is perhaps sufficient on an average day, but today I have to make a lot of efforts to go up and down the hills of the Velky Fatra, in the warm summer weather. After the break I continue my way up to the refuge Kralova Studna in a modest pace, trying to use as much as possible the shades. The final part of the stage, the last climb to the refuge, is inconvenient; I feel light and dizzy in my head, my lips and mouth are dry and it’s about time this stage comes to an end. At 2.55pm I arrive in the refuge.

The refuge is situated just above the trees, at 1300 meters. The view to the south is very nice. The refuge is being reconstructed, and it is only partly available. The diningroom is situated on the first floor, and it is crowded with hikers and some day tourists. The number of besd that are available is limited, but I get a single room with my own bathroom. It is still partly under construction but it is comfortable. I drink a lot of mineral water to recover from the thirst. Later, during dinner, a big group of hikers arrive in the refuge. It is an international group of students, including some Dutch people. They turn out to be students from the university in Nijmegen, situated only 40 kilometers from my home town. It’s a small world.